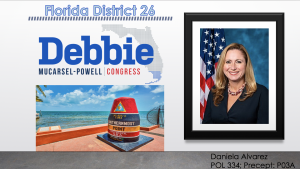 Here is the link to the other slides:  https://drive.google.com/drive/u/1/my-drive 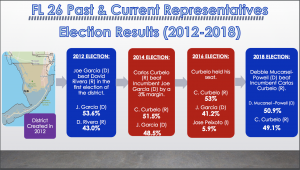 As a result of redistricting following the 2010 Census, parts of Florida District 25 became part of a new district—Florida District 26. The new congressional district stretches from the southern tip of Florida to the western Miami suburbs, including the Florida Keys and all three of the state’s National parks (the Everglades, Biscayne and the Dry Tortugas) and encompassing portions of Monroe and Miami-Dade County. In 2012, the first election served as a rematch between Republican David Rivera, the former Representative of District 25 before it’s renumbering, and Democrat Joe Garcia. Both previously ran in District 25, which had always elected a Republican representative, but now they were running in a battleground district that equally splits between Democrats and Republicans. Garcia defeated Rivera by a 10% margin. The following election (2014), Republican Carlos Curbelo beat then-incumbent Garcia by a 3% margin, flipping the seat red. Then, in 2016, it is important to note that Curbelo managed to win his reelection campaign by 11.8%, while his district voted 56.7% in favor of Clinton and 40.6% in support of Trump. He once again faced Garcia as an opponent. Recently, in one of the most watched races of the 2018 election cycle, Democrat Debbie Mucarsel-Powell beat the two-term incumbent by 1.8% of the votes, showing once again how close the elections in the district are.  In my opinion, what tipped the scale in favor of Mucarsel-Powell was Healthcare and Curbelo’s vote to repeal Obamacare. Also, important to note, is that both Curbelo and Mucarsel-Powell are Hispanic, Curbelo is the son of Cuban exile parents and Mucarsel-Powell is an immigrant herself from Ecuador, and the district is majority Hispanic.

*The above election results were accessed from the New York Times. 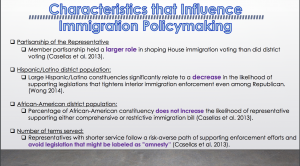 As a lens for analyzing the characteristics that influence immigration policymaking, I will refer to scholarship from Jason Casellas, David Leal and Tom Wong. In “Partisanship or population? House and Senate Immigration votes in the 109th and 110th Congress” Casellas and Leal offer insight into how partisanship, constituency composition, and the characteristics of the member of Congress influence how the member of Congress votes on immigration bills. In the article, Casellas and Leal conclude that partisanship is the only consistent factor of influence and more specifically, that partisanship of the member has a larger role in shaping immigration voting than the district partisanship. They also concluded that district demographics and the personal attributes of the member of Congress were not consistently associated with votes, which personally I am a bit skeptical of this conclusion. Additionally, their results showed that the newer a representative is to Congress and given the framework that will be up for reelection very shortly, the representative will be worried that voting against restrictive measures now might come back to hurt them electorally later on. Regarding district composition, they reason that the percentage of African-Americans in the district does not increase the likelihood of a representative supporting either comprehensive or restrictive immigration. Wong’s article on “The Politics of Interior Immigration Enforcement” provides additional scholarship on the influence of the district population. Specifically, that the size of the Hispanic/Latino percentage of the total population in a district is significantly related to a decreased likelihood of supporting legislation that tightens interior immigration enforcement for both Republican and Democratic Representatives. These are the themes that we will see at play in the next slide. 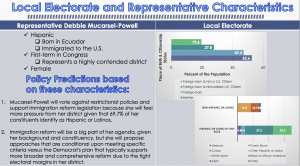 Debbie Mucarsel-Powell is the first Ecuadorian-American and the first South American immigrant elected to Congress and is currently serving her first term in Congress. She represents a district that according to American FactFinder is 69.7% Hispanic or Latino of any race and 10.7% Black or African American. Also, according to American FactFinder, 47.8% of the population is foreign-born, with a little more than half being Naturalized U.S. Citizen and the other half not. Furthermore, she is a Democrat, and thus far she has voted only 2/106 times with the Republicans. With these characteristics in mind (an immigrant herself, first-term in Congress, large Hispanic/Latino district population, closely aligned with the Democratic party), Congresswoman Mucarsel-Powell will vote against restrictionist policies and support immigration reform legislation because there will be more pressure from her district given that 47.4% of her constituents are foreign-born and 69.7 are Hispanic/Latino. I also predict that although immigration reform will be a big part of her agenda, given her background and district composition, her immigration proposals will advocate for policy approaches that are conditional on the immigrant or host country meeting specific criteria.  I think we will see that she will not personally promote the Democratic agenda that typically supports more comprehensive and broader-applied reform, especially when it comes to “amnesty” oriented legislation. I think this will be the case given that FL District 26 is a battleground district will an equally split population of Republicans and Democrats, where she won by a tiny margin. 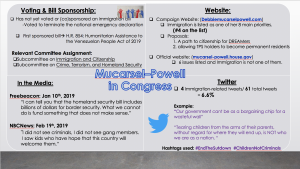 So far Congresswoman Mucarsel-Powell has not voted or (co)sponsored any immigration bill directly, but she has voted to terminate Trump’s national emergency declaration. She has only sponsored two pieces of legislation; the first would provide humanitarian assistance to the Venezuelan people, including Venezuelan migrants and refugees in the Americas. Here, we see her pursuing one of her campaign proposals on immigration and appealing to her Venezuelan constituency, which is growing due to the crisis in Venezuela. On her campaign website, Mucarsel-Powell listed eight priorities with immigration being #4 on her list. In the subsection she provided for each of her priorities, each section had about the same amount of content, maybe 1 or 2 sentences more on immigration over another critical priority, but nothing significant. Additionally, I would argue that under the immigration subheading, she establishes clear and straightforward policy goals, which she does not do for the other sections. One of her policy proposals is that she wants to protect the asylum process for those who need it most, including those who have recently arrived from Venezuela and Nicaragua. Hence, some connection to her first sponsored bill. She also expresses her support for a path to citizenship for DREAMers and allowing TPS holders to become permanent residents. This goes back to my earlier policy predictions on how the representative will approach immigration policymaking. She is in favor of immigration reform, but we can see how she differs from the Democrats. She does not want to establish a comprehensive path to citizenship, at least not explicitly; what she wants is to create a path to citizenship for DREAMers. Her policy proposals are very targeted and inclusive of the immigrant communities of her district. On the other hand, on her official House of Representatives website, she only lists six issues and excludes immigration and gun safety, another of her key policy priorities. However, on both sites, she highlights her personal connection to immigration. After examining her twitter feed, it appears that Representative Mucarsel-Powell has not been very active with only 61 total tweets since beginning her term and only four of those are immigration related. However, I would like to point out that recently there has been a few tweets from the representative addressing Temporary Protected Status and with the word “migrant,” that I did not factor in but are immigration-related. She has signaled that her #1 priority in Congress is Healthcare, which she has only tweeted about once since taking office. Therefore, I do not think the low percentage (6.6%) of immigration-related tweets signal that it is no longer a top priority now that she is in Congress. Comparably, she also only had four tweets during her election campaign out of more tweets then I could calculate, but the percentage would have been significantly lower. Some of her immigration-related tweets have called out President Trump for utilizing the government as a bargaining chip and called the wall “wasteful.” Her tweets tend to push forth this message that she is open to addressing border security, but that the wall is not a solution. She also expressed this sentiment publicly when interviewed by Freebeacon on January 10th, where she stated “I can tell you that the homeland security bill includes billions of dollars for border security. What we cannot do is fund something that does not make sense.”