Himes announced his candidacy on April 19, 2007, quickly receiving endorsements from several political action committees. His campaign was targeted by the Democratic Congressional Campaign Committee (DCCC) as a potential flip; indeed, he beat Republican incumbent Christopher Shays by a slim margin of 4 percentage points and has held the seat since. The figure in slide 1 shows vote counts by party in every election subsequent for this seat. Two patterns emerge that are consistent with broader literature. First, turnout was higher in presidential election years. Second, as a Democrat, Himes faced tighter races in Obama’s midterm years (2010 and 2014); we see tighter spreads in those years. (The President’s party typically underperforms in midterms.) 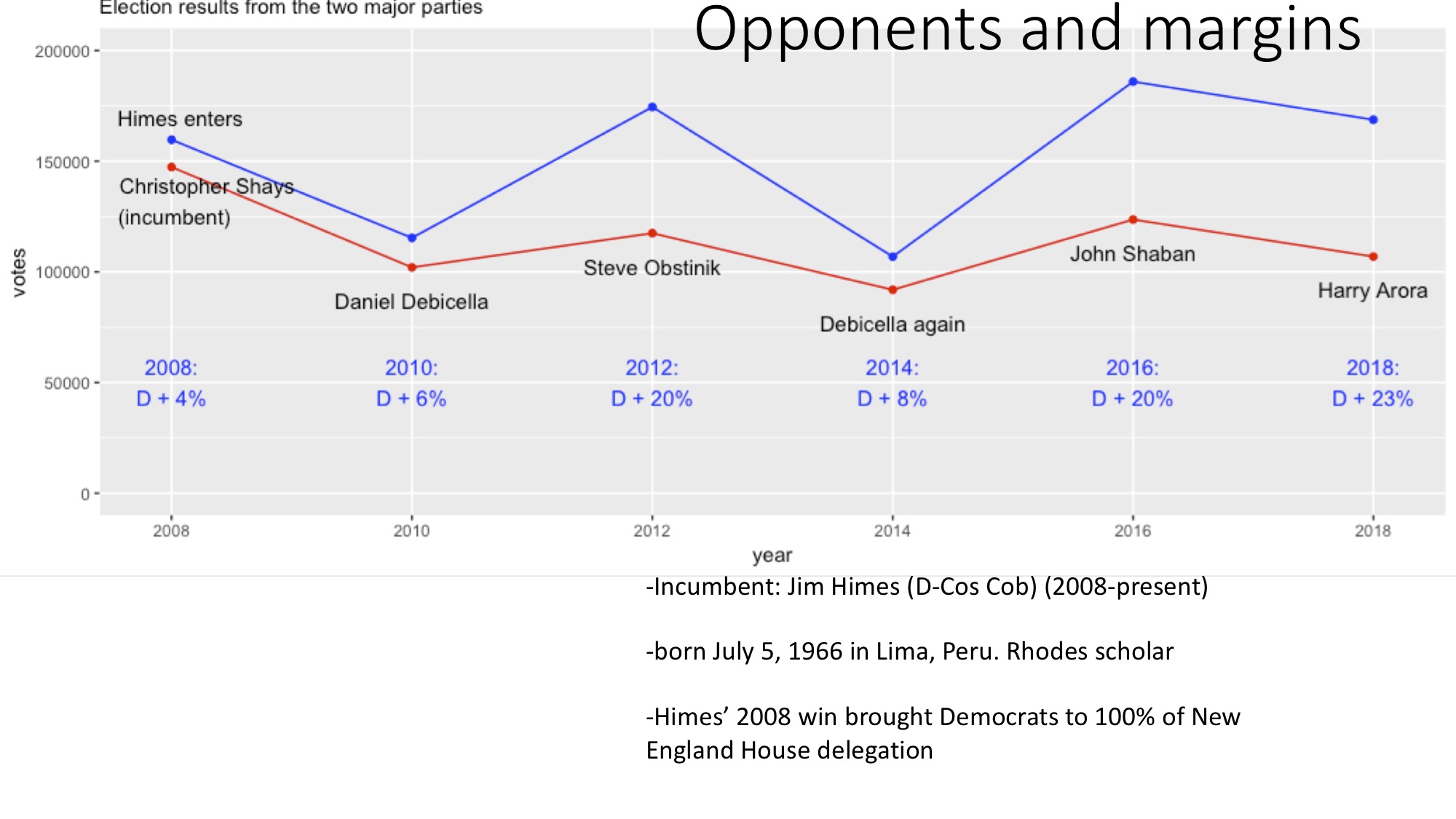 This slide cites literature that we have reviewed in class, mostly focusing on understanding systematic relationships between district-level characteristics and representatives’ propensity to vote for restrictive or permissive immigration policies. Multivariate analyses from Tom Wong and others find consistent patterns; members’ political party can predict these outcomes better than any other variable. However, party is downstream of properties of the district, and none of these studies directly measured constituents’ opinions on immigration. We might wonder then, whether it is in fact party, or instead these unobserved upstream properties, that are truly causing more or less restrictive floor votes. For that reason, we especially care about individual cases when investigating this question. Demographic characteristics like percentage of Hispanics or percent foreign-born are found to be significant, but with very weak point estimates, in Wong’s regressions (2014). This suggests these factors might retain salience in individual cases. 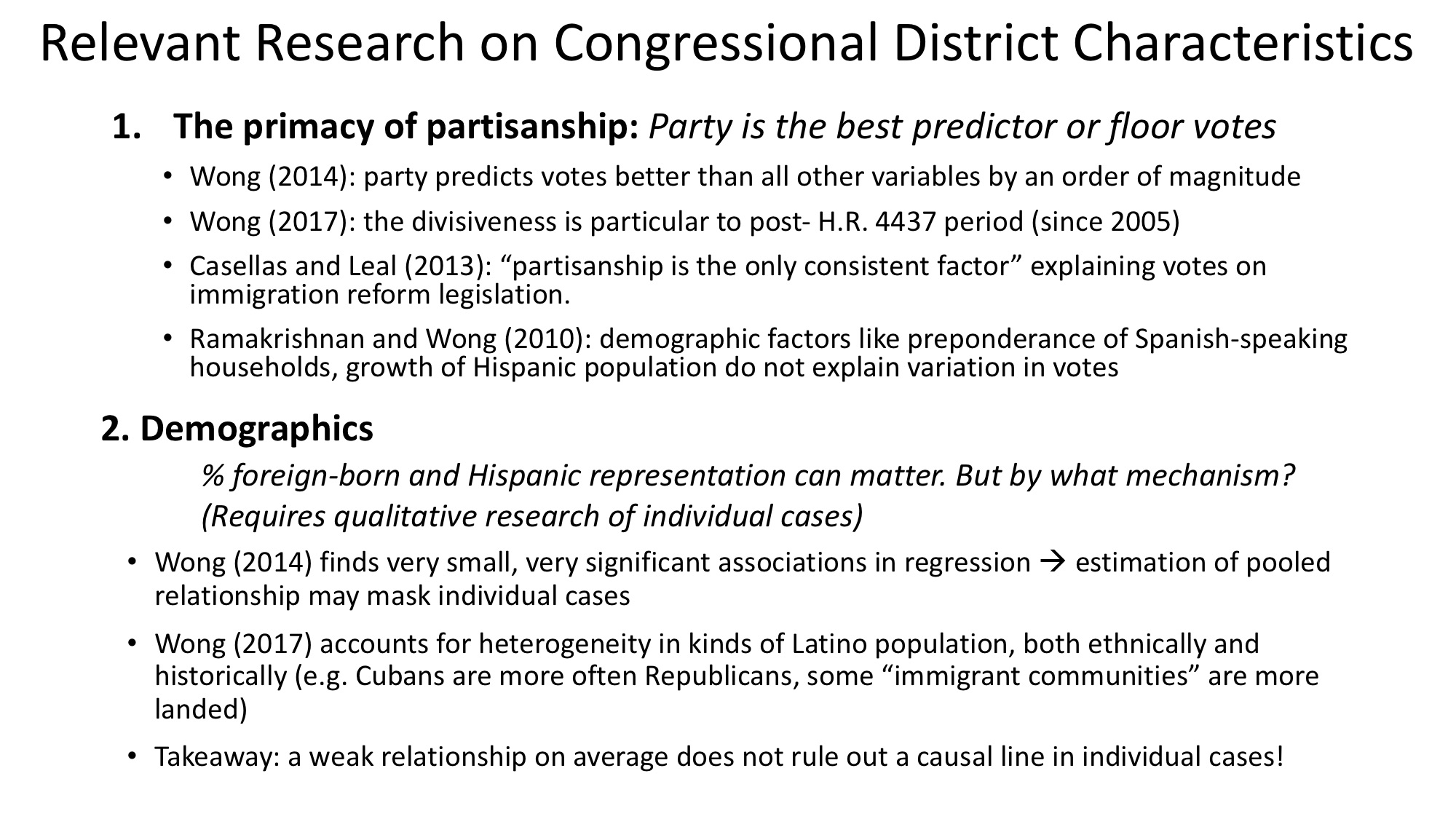 CT-4’s characteristics predict Himes to be quite liberal on immigration. The district is suburban and generally well-educated. It has a higher proportion of registered Democrats and a higher median income than the national average. Himes is nonetheless relatively conservative among House Democrats. His DW-NOMINATE score is -0.241, making him more liberal than 54% of the House, and more conservative than 84% of House Democrats. (source: Voteview) The relative wealth of CT-4 is perhaps the best explainer for this score; as former chair of the New Democrat Coalition, Himes has made clear his commitment to “pro-growth” policies including lower taxes. This neoliberal outlook would presume a preference for more open immigration policies, too. 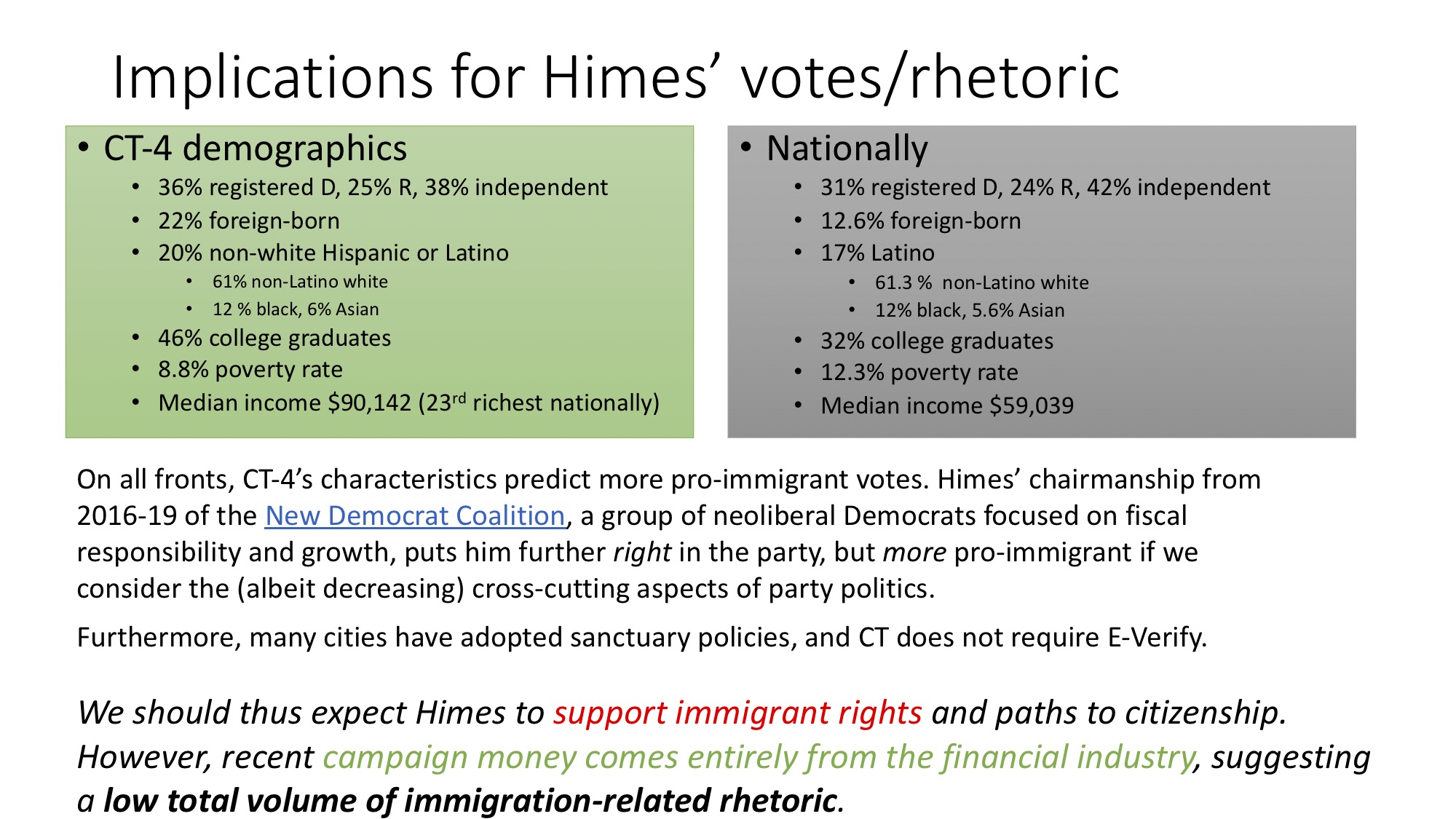 Himes is active on Twitter, but not particularly so with respect to immigration. He has mostly criticized the President’s border wall proposal, arguing that it is ineffectual. On his website, he expresses a commitment to border security, along with a path to legalization for undocumented immigrants “in order to ensure that everyone pays their full and fair share of taxes.” Himes is not a legislative leader on the issue of immigration, as you can see in the top right hand corner of slide 4; his only sponsored bill was defeated in 2010. He has only broken with House Democrats a couple times on immigration votes: once in 2012 re: skilled immigration, and once in 2018 on a symbolic resolution about the voting enfranchisement. 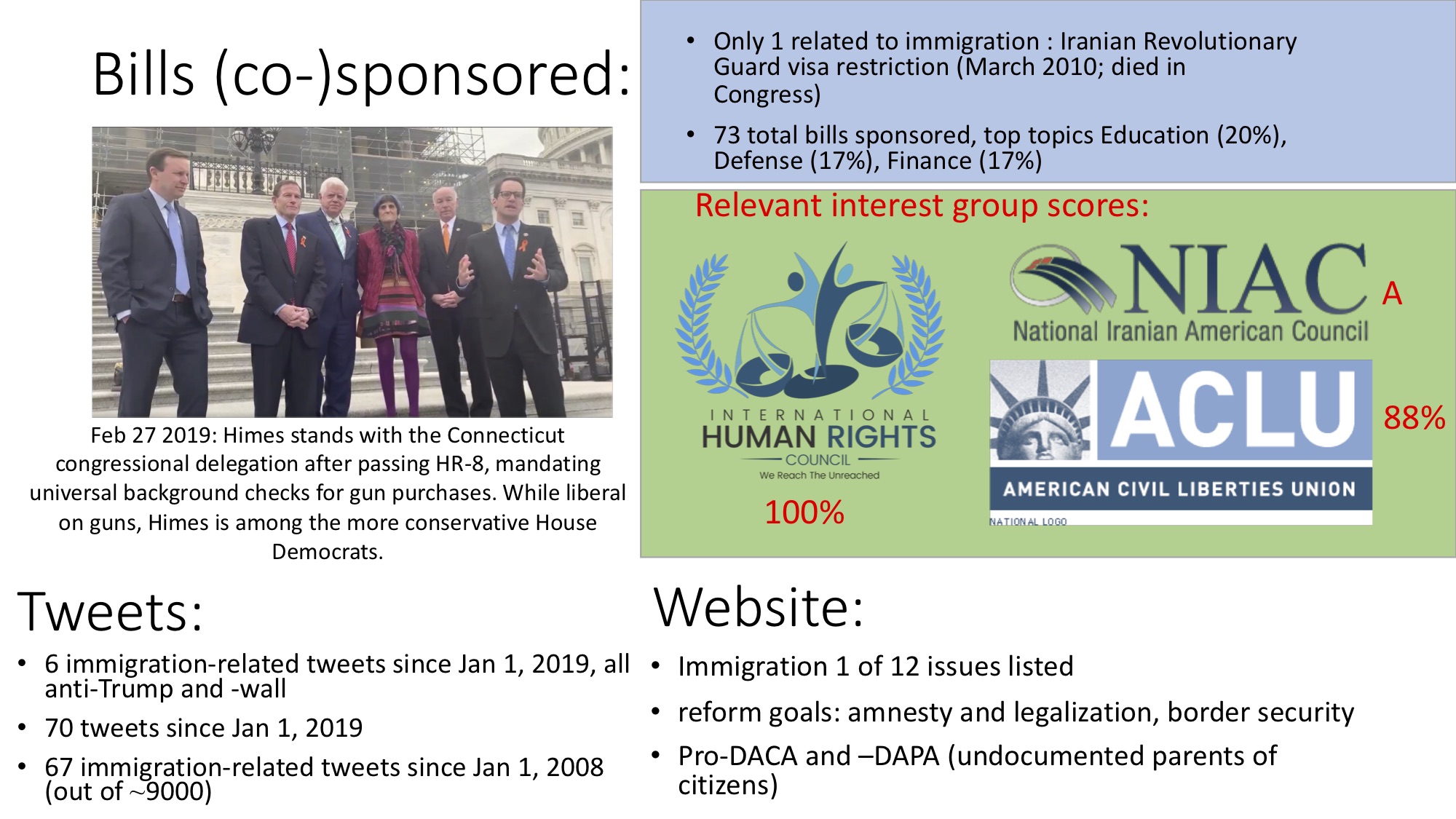