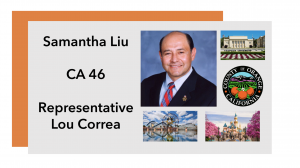 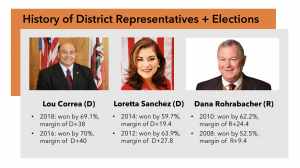 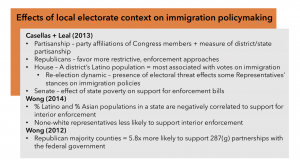 Slide 2: In this slide, I focus on three main sources to summarize the effects of local electorate context and Congressional members’ characteristics immigration policymaking. In research done by Casellas and Leal (2013), they found that partisanship increasingly structures Congressional voting on the issue of immigration. The party affiliations of Congressional members as well as the measure of partisanship within districts and states had a significant effect in all House votes and most Senate votes (Casellas and Leal 2013). Republicans tended to favor more restrictive and enforcement approaches, while Democrats had an opposite approach. Within the House, Casellas and Leal (2013) found that a district’s Latino population is most associated with votes on immigration; the larger the population, the more likely a member will support comprehensive immigration reform and oppose restrictionist proposals. In addition, the House is also characterized by a “re-election dynamic,” meaning representatives facing electoral threat follow a risk-averse path by supporting enforcement efforts. In the Senate, however, state poverty had a large effect on immigration votes, as greater poverty led to more support for enforcement bills. On the topic of interior enforcement, Wong (2014) found that the percent of Latino and Asian populations in a state are negatively correlated to support for the issue, while none-white district representatives are less likely to be supportive. Wong (2012) found that Republican majority counties are 5.8 times more likely to support 287(g) federal enforcement partnerships than Democrat counties are. 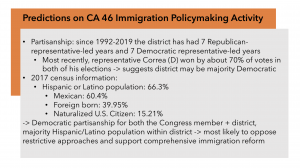 Slide 3: Using the research summarized in the previous slide, I predict the effects of some of these characteristics on CA 46’s policymaking activity on immigration. Given that the district has had a Republican representative for seven years and a Democratic one for the same number of years from 1992-2019, it is difficult to gauge its partisanship. However, by analyzing current representative Correa’s election history, specifically how he won about 70% of votes in both of his elections, we can assume that CA 46 is majority Democratic. Furthermore, data from the 2017 census shows that 66.3% of the district’s total population is Hispanic or Latino, with 60.4% being Mexican. In addition, almost 40% of the population is foreign-born, with another 15% as naturalized U.S. citizens. This high percentage of Latino and foreign-born population, coupled with the district and Correa’s Democratic partisanship, lead me to predict that the representative is most likely to oppose restrictive, enforcement policies, including interior enforcement and 287(g) partnerships, and support comprehensive immigration reform policies. 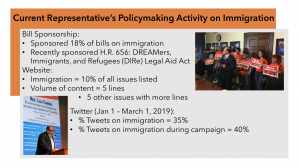 Slide 4: This slide details some of Correa’s activity surrounding the issue of immigration. 18% of the bills he has sponsored are related to immigration, and more recently in January he sponsored H.R. 656: DREAMers, Immigrants, and Refugees (DIRe) Legal Aid Act which “require[s] the Attorney General to make grants to nonprofit organizations to offer legal assistance to certain aliens lawfully admitted for permanent residence, DACA recipients, and refugees, and for other purposes.”[1] On his website, immigration is listed under the “Issues” section and includes the description, “As a Member of Congress, Congressman Correa fights to protect individuals and families of all backgrounds. Congressman Correa supports DREAMers and understands the importance of protecting new Americans. Following the president’s Executive Orders on the travel ban, Congressman Correa introduced legislation to ensure that refugees, immigrants, and DREAMers have access to legal advice from immigration experts. Congressman Correa continues to advocate for comprehensive immigration reform.”[2] Correa does have nine other issues listed under this section and five of them have longer content than immigration. While Correa is not extremely active on Twitter, he does frequently tweet about immigration, with 35% of his tweets from January 1st to March 1st focusing on immigration. The content of these tweets included criticism towards Trump’s wall, commentary on the Family Separation Policy, and overall support for immigrants and DREAMers. Correa’s ongoing support for immigration was covered by the media when he invited Marco Villada, an LGBT former DACA recipient, to Trump’s State of the Union Address.[3]