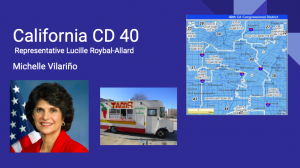 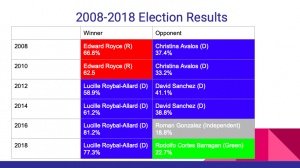 Since 2008, CA 40 has only had 2 Congressional representatives. Edward Royce, a Republican, was the representative since the 2002 election until the 2012 election, and before then the representatives were mostly Republican. Lucille Roybal-Allard, a Democrat, won the 2012 election against another Democrat. The opponents since 2012 have been Democrats, Independent, or Green Party members. It’s clear that in 2012 there was a shift. This shift might have been due to the redistricting from Orange County (which has a mostly White population) to what CA 40 contains now (mostly Hispanic). 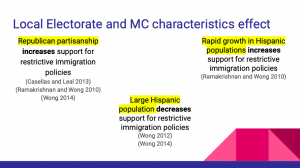 Ramakrishnan and Wong (2010) studied what factors impact the proposal and passage of restrictive and pro-immigration policies. Their results showed that in the passage and proposal of policies, partisanship is the most consistent factor. In the passage of policies, the growth of the Hispanic population increases the likelihood of support for restrictive policies while recent immigrant population increases pro-immigration support. Wong (2012) studied what factors will impact the municipal government’s likelihood to request partnerships for federal immigration enforcement. He found that rapid Hispanic population growth increased the likelihood for support yet a large Hispanic population decreased the likelihood for support. Most research findings show that partisanship is what drives the representatives support restrictive immigration policies, if they are Republican, or to not support restrictive immigration policies if they are Democrats. This is seen in Casellas and Leal (2013), Ramakrishnan and Wong (2010), and Wong (2014). 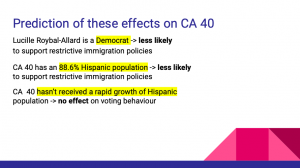 Based on the research evidence, it can be predicted that Representative Roybal-Allard will not support restrictive immigration policies since she is a Democrat with a very large Hispanic population. Since there hasn’t been a rapid Hispanic population growth it is not likely that this will affect her voting behavior. 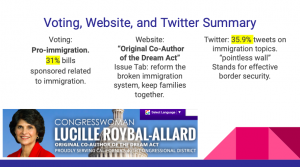 Lucille Roybal-Allard’s voting record shows that she is very pro-immigration. A total of 31% of the bills she has sponsored are related to immigration, which is the second most, Health-related bills being the most she has sponsored. Her website shows large support for immigration. Right underneath her name, she describes herself as “Original Co-Author of the Dream Act” this shows that she really cares about immigration and that it is an important topic. In her issues tab, she has a tab dedicated to immigration with six paragraphs that beg for reform of a broken system, she humanizes immigrants, and fights for citizens and noncitizens equally and to keep families together. Most of her other issues (13 other issues) have three paragraphs except Health which has seven paragraphs. In her Twitter, we can also see that immigration is very important. 35.9% of her tweets from Jan 1, 2019, to March 1, 2019, are about immigration-related topics, most of which are against President Trump’s “pointless” wall, she desires a humane immigration system as well as effective border security. All of this shows that Lucille Roybal-Allard would be against restrictive immigration policies, instead, she supports pro-immigration policies.