The New Negro movement refers to a period of artistic creation that intended to reconstruct the image of blacks in the minds of blacks and whites alike. At the movement’s inception, American art was oversaturated with racially charged and caricature-like images of individuals of African descent. Henry Louis Gates Jr. writes on this, stating that at the time that the New Negro was pioneered, “everywhere he or she saw a black image, that image would be negative.”[1] Common negative representations included images of blacks being lynched, depicted as coons with exaggerated features, and engaged in primitive actions such as wild dancing [fig. 1]. 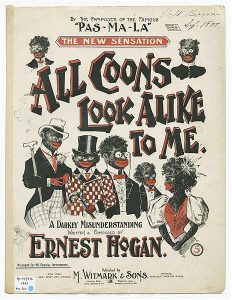 Fig. 1
M. Witmarks and Sons
All Coons Look Alike to Me (Written and Composed by Ernest Hogan)
1896
Sheet Music Cover

Arising slightly more than three decades after the signing of the Emancipation Proclamation, the New Negro movement sought to rename and reframe the image of blacks in the American imagination. Individuals such as Sojourner Truth and Frederick Douglas emphasized the importance of renaming themselves in the act of reclaiming their identities once out of slavery. This process of re-invention provides us with a helpful framing for the New Negro movement. In an 1895 editorial on the New Negro in The Cleveland Gazette, the author describes the New Negroes as ‘a class of colored people […] who have arisen since the war, with education, refinement, and money.”[2]

This new, primarily upper class of blacks stood in sharp contrast to the conditions of blacks while under enslavement. This contrast can be visualized in a series of photographs by W.E.B. DuBois. In A Small Nation of People: W.E.B. Du Bois & African American Portraits of Progress [fig. 2], DuBois created a series of individual and group portraits to visually represent the birth of the New Negro identity. This is achieved primarily in the gestures of the subject. They are posed in self-assured manners that speak to the confidence associated with the New Negro identity. In addition, the shoulders of the subjects are generally broad and strong, demonstrating not only a sense of confidence, but a sense of belonging. The direct eye contact of some of the subjects with the viewer shows a self-awareness of being looked at. Those not looking into the camera seem to display a rebelliousness that indicates their refusal to acknowledge that they are being watched by an audience. This allows the subjects to present authentic sides of themselves without bearing others’ expectations of who they are supposed to be. In other words, it provides a mechanism to avoid engaging in a perception of self that is crafted by others. Instead, these subjects are able to relish in the confidence of their self-representation that is shaped by the New Negro identity. 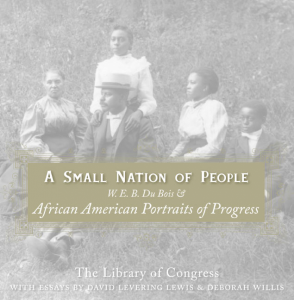 Another attribute of the portraits that alluded to the New Negro identity is the style in which the women and men were dressed. It was a sophisticated style that demonstrates wealth, and a value in self-care and presentation. This arose from the clothing’s designs as well as the extravagant nature of the accentuated pieces, such as hats, ruffles, feathers, and other ornamentation [fig. 3]. The genderization of the clothing also showed the settlement of Negro men and women into their gender roles as perpetuated by American bourgeois society. This quality and style of clothing allowed black men and women to assimilate into middle and upper-class American culture. 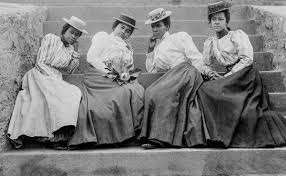 Fig. 3
Women Sit on Steps at Atlanta University in Georgia
1900
Photograph from W.E.B. Du Bois’s A Small Nation of People

The New Negro was envisioned to be cultured and refined. However, as Henry Tanner’s experience shows, there were many obstacles that African-Americans – or more specifically, African-American artists – had to overcome to find success in the fields of art and culture. For instance, Tanner had difficulty finding a long-term mentor and access to instruction in Philadelphia due to racial prejudices. In France, however, where Tanner travelled with the generosity of his friends, he was able to access greater resources as an art student at the Académie Julian. He had weekly drawing sessions with models, and he received critiques from professional artists on his work.[3] While Tanner painted a few works during his career that portrayed the African-American experience, such as The Thankful Poor or The Banjo Lesson [fig. 4], his early works focused on French genre scenes and his later works were religious and oriental in nature. 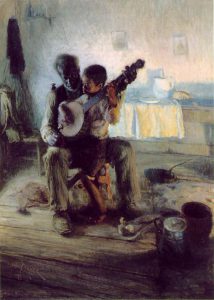 However, Tanner became a role model for African American artists during the 1920s and beyond. Richard J. Powell suggests that despite Tanner’s disinterest in black subject matters, he solidified a place among the most celebrated African-American artists because he was able to achieve transcendental success.[4] He became representative of the New Negro because he personified a successful, culturally refined, and artistically talented artist working in Europe. His works became celebrated for their technical mastery and subject matter in Europe as well as in America – his success, in other words, was not restricted to particular political, racial, or geographic confines. African American artists looked to Tanner as a role model for universality. At the same time, however, there was a desire to move away from European standards and establish a common black aesthetic within African American arts. This became significant during the Harlem Renaissance.

[2] Ibid. The quote was originally taken from an editorial from an 1895 issue of the Cleveland Gazette.