The Evolution of the Blues

The Negro aesthetics and the blues have a special relationship in the sense that they are very different, but are intertwined in African American history. The Blues is deeply rooted in African American History originating from southern plantations. Slaves would often sing lyrics African spirituals as a way to genuinely communicate emotions and overcome personal adversity. The blues has since evolved from Negro spirituals, essentially becoming a form of cultural music that reveals the many emotions of someone’s day to day life. Many impactful artists have had an influence on the dispersion and progression of the blues. I intend to take you through a visual representation of the blues as it evolves as an art form and transitions into what we now know as jazz. As a theme for the blues I want to use the term dispersion to describe the blues.

The mural “Aspiration” by Aaron Douglas (1899- 1979) signifies the freedom from bondage that African Americans encountered early on in American History. The mural portrays the beginning of the Great Migration of blacks dispersing from the agricultural south to the industrial north. 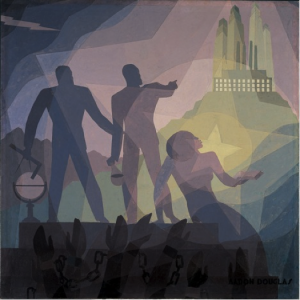 In the mural the African Americans are wielding tools and instruments pointing up towards what seems to be a great city. Art Historian Martin Fox claims that the African Americans are pointing towards modern buildings that symbolize the notion that America is the “city on the hill.” [1] This mural helps to transition to Jacob Lawrence’s (1917-2000) “The Migration of the Negro”. 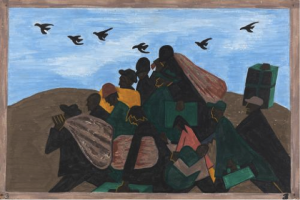 Jacob Lawrence, The Migration of the Negro, 1940, casein tempera on hardboard,

12 in x 18 in, The estate of Gwendolyn Knight Lawrence

“The Migration of the Negro” depicts the migration of freed slaves from the manual labor in the south to the aspiring north. Although, this mural does not inform its audience of blues directly, in the act of migrating, blacks would often sing African Negro Spirituals/blues, as a way to pass time and uplift the spirits of others near them that were enduring the same hardships. This now leads me to the second painting in “The Migration Series” by Jacob Lawrence. 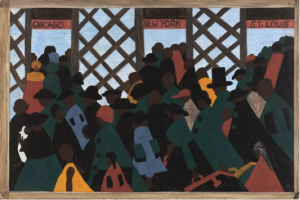 Jacob Lawrence, The Migration of the Negro, 1940,

The estate of Gwendolyn Knight Lawrence

This painting symbolizes the dispersion of southern blacks fleeing to different cities in north to seek equality and justice. However, in reality they were harshly accepted and faced many social and economical injustices. This caused most of the Black communities to live in poverty and forced many to take on manual labor jobs. 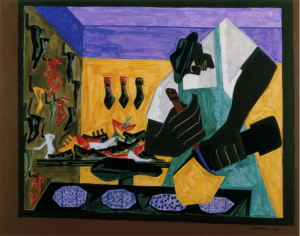 The estate of Gwendolyn Knight Lawrence 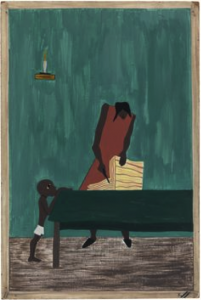 The Phillips Collection, The Jacob and Gwendolyn Knight

Both paintings above by Jacob Lawrence depict three African Americans that are living below the poverty line. A shoemaker is consistent manual labor, but it shows strength and perseverance all qualities that the blues promotes. In the painting to the right the African American woman is giving her child bread as a meal, at that point time foods like bread, rice, and honey were more affordable for low income families. This helps to transition to how the blues as a form of art and music came to be seen as a way into the entertainment industry, as seen by the mural “Songs of the Towers” by Aaron Douglas. 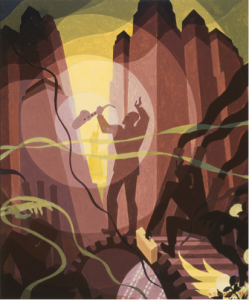 This mural symbolizes the cycle of life for a black male in America, and the constant struggle of climbing barriers to reach an end goal that should constitutionally be in reach for every American citizen. At the focal point of the mural of the mural is a saxophone. Essentially, representing what the blues is at some level. The Saxophone represents the music of poor black laborers, as it portrays the hardships and mixed emotions of the black community. At the same time the blues was a bridge to many other forms of music art form. Blues was the link to mainly jazz because the content for blues was hardship, sadness, and pain used to help mediate personal frustrations. Jazz became more mainstream involving content from the blues, but it was more upbeat with synchronized rhythms and used for entertainment purposes, like dancing and monetary benefits. 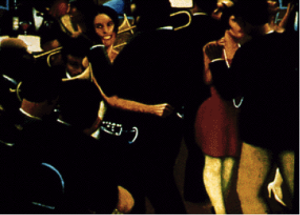 According to the book Rhapsodies in Black: Art of the Harlem Renaissance, “Blues gives form, colour, and meaning to the Harlem Renaissance idea of a part aural, part performative act of black enchantment”.[1] The blues acted as a gateway for jazz allowing jazz to become a way for African Americans to express themselves and form an identity within society, making the blossom of the New Negro such an intangible part of the African American Culture.