Past and Future Visions of Diaspora

Past and Future Visions of Diaspora:

In the first half of the 20th century artists of the African Diaspora turned their attention towards the Caribbean. Countries such as Cuba and Haiti became symbols of freedom from racial oppression, colonization and their various effects. This short essay will be examining how two of these artists, Jacob Lawrence (1917-2000) and Wilfredo Lam (1902-1982), turned to Haiti and Cuba respectively for their liberation. Lawrence created art that invoked the Haitian Revolution in order to inspire individuals of the Afro-Diaspora to collectively work to dismantle racial oppression. Lam turned towards his home of Cuba in order to create art that would inspire a vision of a future that acknowledged and confronted the legacy of slavery.

In 1915 the U.S. launched a military occupation of Haiti and a supervision of the economy that would last until 1934 and 1942 respectively.[i] This move “elicited strong opposition among black leaders, literary figures, and artists” in the U.S. who had been inspired for centuries by the Haitian Revolution that ended slavery and French colonial rule.[ii] This included the African American artist Jacob Lawrence, who from 1937-1938 created a forty-one panel series titled The Life of Toussaint L’Ouverture, which was named after one of the leaders of the Haitian Revolution.[iii] Lawrence saw the series as providing an opportunity to shift from depicting past events in Black history as they were already known to exemplifying the political relevance of the Haitian revolution to the current quest for black self-determination.[iv] 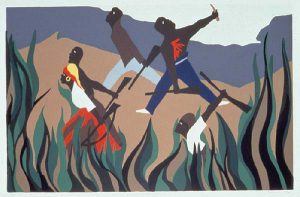 Take his silkscreen, To Preserve Their Freedom (1988). The image depicts five Haitian figures who walk in a determined fashion with their heads held high and rifles in their hands. A figure in the upper right corner of the silkscreen who wears blue pants has been clearly hurt, as indicated by the red blood that oozes from his chest. Yet he nevertheless stands strong and turns back to the individuals who have presumably wounded him with his arm raised, carrying some unidentifiable tool or weapon. Drawing from the title, the work suggests that these individuals will resiliently fight to preserve their freedom at whatever the personal cost. One can see how the work would have had the dual effect of inspiring its spectators to imagine the actual fight taken up by the Haitians in 1804 to overthrow the French as well as to serve as a call to action to take the same risks to promote the freedom of all individuals of the African Diaspora.

For Cuban artist Wilfredo Lam, his focus on his native Caribbean was conducted as a part of the larger Négritude movement. Négritude arose out of the writings of Aimé Césaire (1913-2008), Guianan Léon Damas (1912-1978) and Léopold Senghor (1906-2001) in the 1930s in France and was originally dedicated to establishing an authentically black worldview. In 1941, Césaire returned to his home of Martinique, where he met and established a friendship with Lam, who had taken refugee there after a period studying in France with Picasso.[vi] Their friendship led to an alliance between Surrealism and Negritude and supplied Lam with the elements of his style.[vii] 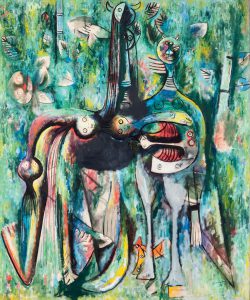 In his work, Lam specifically turned towards his home of Cuba as a site to reckon with his Afro-Diasporic identity. Consider his painting, Dark Malembo, God of the Crossroads (1943) that invokes the Negritude movement through its nature imagery, and voodooism. In the center of the image stands the tall and human-horse hybrid “Dark Malembo”. The second figure is also animal-like with horns and hoof-like feet and stands guard at Dark Malembo’s side. The figures are deeply embedded in the sugarcane field and leaves even appear to grow off of them. This simultaneously invokes the legacy of slavery in Cuba, and its resulting displacement, and provides a “poetic evocation of Africa”.[viii] In addition, the title God of the Crossroads, references “Lam’s femme cheval,” a figure born out of the Caribbean syncretic religions who “journeys from the lost African past towards the uncertain figure of the West.”[ix] Through its elements, the work becomes both “historical and redemptive” as it places its viewers in the crossroads between recognizing their historical African past and utilizing this to reclaim their future.

For various Black artists of the 20th century, the Caribbean became a site that allowed them to confront the past as well as develop an imagined future of Black liberation. For Lam and Lawrence specifically, this involved an acknowledgement of slavery’s past and its lasting effects as well as facilitating unity amongst individuals of the African diaspora in order to claim a space where Black individuals worldwide would be free from oppressive forces.

[v] In 1986, Lawrence began transferring paintings from the series into screenprints. http://www.tfaoi.com/aa/1aa/1aa182.htm