Identity and Opportunity Through Jazz

So for generations in the mind of America, the Negro has been more of a formula than a human being—something to be argues about, condemned or defended, to be “kept down,” or “in his place,” or “helped up,” to be worried with or worried over, harassed or patronized, a social bogey or a social burden.[1]

Alain Locke further explains that Blacks began to oppose the tyranny of social intimidation.[2] According to Osofsky, “A cultural rebellion of the first order erupted from beneath the complacency and conservatism that were dominant characteristics of American society and politics then.”[3] During the Harlem Renaissance in the 1920, Blacks began to create their own identity and independence through the arts such as, paintings and music. Jazz was produced with the combination of African and European music traditions. Although African and European music played an important role in the production, jazz was a product of many different evolutions. Some scholars trace jazz to African music while others see it expressed in the emotional tone of the “blues” reaching back to slave days in order to get away from the exploitation and bondage endured.[4] A few major jazz musicians during the Harlem Renaissance were Duke Ellington, Louis Armstrong, and Jelly Roll Morton.

The social background of jazz is predominantly lower class Blacks who came from poverty stricken experiences, lack of education, and worst forms of segregation.[5] During the Harlem Renaissance, jazz played a role in social change. The “Harlem Stride,” the first piano style incorporated in jazz, helped “blur the lines between the poor Negroes and socially elite Negroes.”[6] Jazz enabled upward mobility for Blacks by being able to travel abroad, appear in foreign capital, and appear on radio and television.[7] As long as there was a demand by white Americans, black musicians were granted opportunities by the radio and recording industry.[8] The oil on canvas below by Aaron Douglass depicts the different aspects of life that African Americans faced. 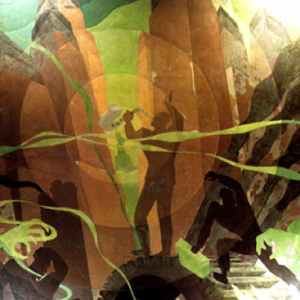 The people on the wheel are very important when describing the status and experiences of African Americans in the 1920s and 1930s. The man in the bottom left looks as if he has been held captive by the hands. This man represents the Great Depression Era.[9] The man on the bottom right is currently running on the wheel with a suitcase while avoiding the hands. This persona resembles the great African American migration.[10] The third man is on top of the wheel with a saxophone in his hand looking up to a possible higher power. This man represents black creativity and self-expression.[11] My interpretation of this mural is that music, jazz in particular, helped blacks escape the harsh, stringent south and were able to establish their own black identity. 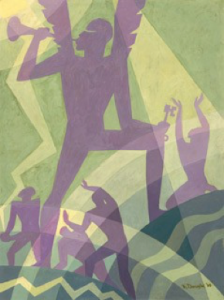 In this painting, a black angel Gabriel stands on a platform with a horn in one hand and keys in the other. The archangel orders the living and dead to judgement. The waking up of the dead and the answering from the living represents the power that music had during the Harlem Renaissance. The two people raising their hands in praise and recognition of the music signifies the strength that blacks received through jazz. The Biblical Judgment day exemplifies the importance of an individual’s identity and how one is free to act however they want. With jazz, people were able to freely establish their own identity. 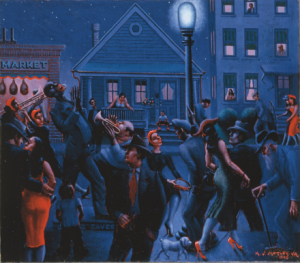 According to Powell, Archibald Motley’s paintings reflect the changes and conflicts in society, subjectivity, and aesthetics from the 1920s to the 1940s.[12] In this painting, black people are in the street dancing while jazz musicians are performing outside. Jazz created and enhanced a rebellious society while being free from the bourgeois. In this painting there are only black people in the area celebrating and dancing. It is clear that the music being played is allowing musicians and dancers to be free.

[6] Johnston, “An Archive for Virtual Harlem.”

[9] Powell and Bailey, Rhapsodies in Black: Art of the Harlem Renaissance, 24.