The Harlem Renaissance was the most influential movement of African American literary history (Britannica), emerging in New York City between the end of the World War I and the 1929 stock-market crash. According to Richard Powell, it was a time period where black people were unshackled from self-doubt and began to be optimistic in their views. The Harlem Renaissance was the foundation for Black revolutionary thought in America and around the world; it sparked a new Black consciousness, one that was not subjected to white condescension.

The beginning of the new negro started with what we now know as the Harlem Renaissance. Powell gives a definition of the Harlem Renaissance, Powell seemed to be establishing the harlem renaissance as the cultural and intellectual recreation of the new negro into modern society. The harlem renaissance was essentially the new Negroes platform to enter into the modern world. Black Filmmaker, Oscar Micheaux, produced a film that portrayed “New Negro”types leading away from old Negro visuals.

Important figures associated with the Harlem Renaissance are Aaron Douglas (painter), Langston Hughes (author), Zora Neale Hurston (author), Duke Ellington and Billie Holiday (Jazz musicians). The musicians, artists, and writers from this time period were not only life changing in their era bringing a black presence into the modern world, but their movements were blueprints for many of the art forms we have today.

Visual Art — How Are They Connected to the Broader Argument?

Different art forms such as, music, dance, and writing were ways of achieving this liberation and hopefulness. Art acted as a means of expressing said liberation. Visuals such as paintings, photographs, or cinema were ways that Black artists were able to portray a new racial entity in modern society. All in attempt to gain attention towards a continually changing identity. The photo from Richard Roberts showing two well dressed young men can be assumed to be well educated and entrepreneurial. Essentially, not only reborn but self made.

For example, Aaron Douglas’ Song of the Towers perfectly encompasses the experience of being black in America. In this painting, a man is standing on a wheel and reaching up towards the heavens, as if to reach up towards his goals. As he holds his saxophone, he is an “avatar of black creativity and self-expression” (Powell 24). There are two men on either side of the main character, showing two distinct African American conditions in history — the Great Migration from the south towards northern cities (the man is walking with luggage in his hands) and apprehension during the Great Depression (the man is fallen and seemingly disheveled). The cogwheel, a representation of the industrial rat race, is symbolic primarily due to the placement of all three men: one is on the come-up from the South and headed towards new opportunity, one is in prime position as a musician and able to express his new liberty, and the other is broken by the lack of economic opportunity due to the Depression (Powell 24).

In Miguel Covarrubias’ Rhapsody in Blue, creates an image that symbolizes the liberation that African Americans had during the Harlem Renaissance. With the help of the music that the jazz musicians are playing, she is able to be free to sing and dance. When analyzing this photo, it seems as if the blues singer feeds off of the musicians’ energy and vice versa. The color scheme that Covarrubias chooses is unique in its own way as well. The bright teal colored dress and golden upper body of the woman helps the audience recognize her as the spotlight of the image. As Powell states, “the blue singer’s gestures communicate a gendered response to music, love and life” (24). This description and image is an example in the evolution of African American emotion in America. 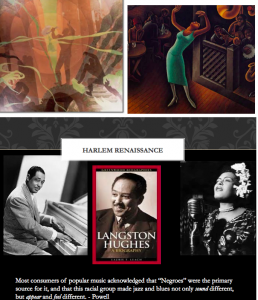