OTHELLO
I had been happy if the general camp,
Pioneers and all, had tasted her sweet body,
So I had nothing known. O, now for ever
Farewell the tranquil mind; farewell content;
Farewell the plumèd troops, and the big wars
That makes ambition virtue—O, farewell!
Farewell the neighing steed and the shrill trump,
The spirit-stirring drum, th’ear-piercing fife,
The royal banner, and all quality,
Pride, pomp, and circumstance of glorious war;
And O you mortal engines, whose rude throats
Th’immortal Jove’s dread clamours counterfeit,
Farewell! Othello’s occupation’s gone.

OTHELLO
Villain, be sure thou prove my love a whore!
Be sure of it; give me the ocular proof;
[He seizes Iago by the throat]
Or, by the worth of mine eternal soul,
Thou hadst been better have been born a dog
Than answer my waked wrath!

IAGO
Is ’t come to this?

OTHELLO
Make me to see ’t, or at the least so prove it
That the probation bear no hinge nor loop
To hang a doubt on, or woe upon thy life!

OTHELLO
If thou dost slander her and torture me,
Never pray more. Abandon all remorse;
On horror’s head horrors accumulate;
Do deeds to make heaven weep, all Earth amazed;
For nothing canst thou to damnation add
Greater than that.

There are so many iconic music/sound moments in this play that I hope we’ll get to talk about, hopefully via people’s exercises (the drinking songs, the Willow Song, the importance of vocal dynamics to Iago’s trickery, the handkerchief refrain, etc.). But this moment of Othello the orator caught my attention, particularly the lines I’ve bolded above (which I also used for my sound representation below.)

I was struck how Othello here creates an aural soundscape in his lament (/valediction?/elegy?), with quasi-onomatopoeic descriptors of the sounds of war: the syncopated /s/s and /r/s of “spirit-stirring,” the bray of “neighing.” Why is it sound that Othello ultimately latches onto, contrasted against the other lesser-developed senses of taste (“tasted her sweet body”) and sight (“plumed troops,” “royal banner”)? (We’d do well to recall that it is Othello’s visuals “of antres vast and deserts idle,” rendered enchanting by his eloquence, that make his life story in 1.3 so memorable.) Of course, this intense inventory of sound here highlights by contrast Othello’s call for “ocular proof,” and his obsession with “seeing” Desdemona’s treachery, a treachery that has its basis only in false words, which in turn warp the visual reality Othello “sees.”

In a description extending two full lines, cannons (“mortal engines”) are personified as having “throats” that mimic the sound of thunder, an image swiftly followed by a literal throat: Iago’s, seized by Othello in a stage direction. The supreme irony is that through this action, Othello unwittingly identifies the very “mortal engine”—Iago’s vocal cords—that is the instrument of his demise; to dovetail off of Yan’s post, Othello, for a brief moment, silences the whispering devil that has been pouring lies into his ear, with Iago managing only to squeak out impotent half-lines at best. (The Kenneth Branagh film version makes this dynamic all the more explicit by cutting Iago’s lines entirely and having Othello steamroll through his speech at an increasing pitch, as he chokes and nearly drowns Iago.)

I was curious as to how phonemes are operating in this passage that takes up sound as its subject and voice in its staging, and thought I’d take a stab at testing Smith’s claim that “volume control is written into scripts for the stage” (226). Given Othello’s affective range in this passage (as opposed to the level-headed storyteller we see in Act 1), how does the passage’s phonemic composition script volume? Using Smith’s chart on p. 226, I came up with the following color coding system for visualizing the relative intensities of the various phonemes: 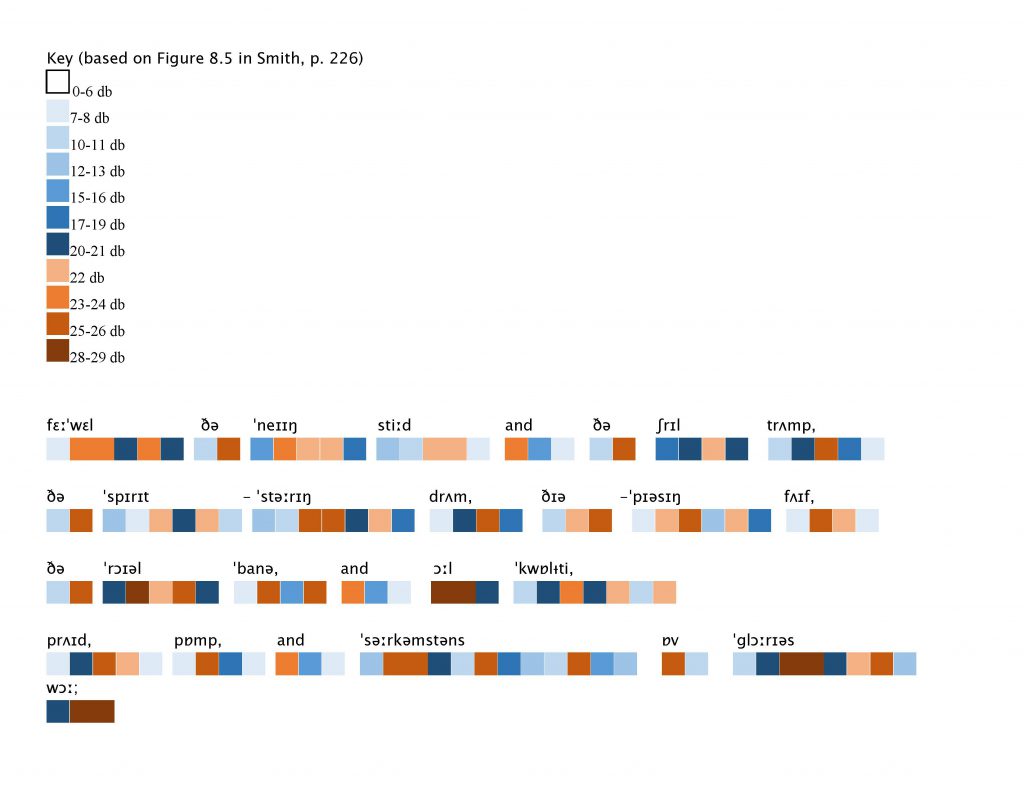 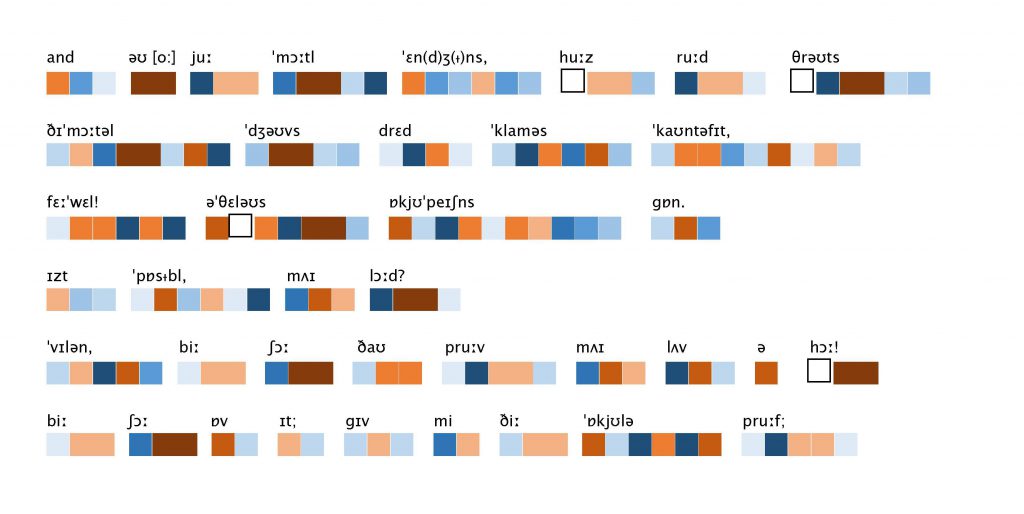 I encountered many methodological challenges, and this is a rough approximation for sure, riddled with errors and best guesses. But it shows some connections I may not have made as a reader otherwise: the least intense phonemic combinations are concentrated in the beginning and end of the passage, giving the overall passage the visual shape of a bell curve; the first two lines I analyzed lack the intense /o/ sounds that pepper the rest of the lines and reach an apex arguably in “whore”—a keyword in the play that comes to describe each female character. “Whore” is doubly emphasized by echoing the sounds of Iago’s “lord” in the previous line and offsetting the high volume vowel with the low volume fricative /h/. We can also draw connections between words based on their comparable intensities (“all” and “war”) or sound progression (e.g., those words like “steed,” “trump,” “spirit,” “pride,” and “pomp,” beginning and ending with low-volume consonants).

I think we could productively question how far this exercise is useful or practical for depicting the sound/volume of lines that have so many other factors determining their shape; I’m interested in the tension between such an idealized phonemical analysis and the overall delivery choices that go into an actor’s performance, not to mention complicating factors like historical linguistic changes and regional accents. I’m wondering, though, if this sort of phonemical analysis could help us broaden literary concepts such as alliteration or assonance to encompass the physiological similarities between sound families, which give the line its sonic texture and seem to call for a certain kind of delivery? (One can hear Othello bitterly spitting out the plosives and fricatives that begin each word in “hadst been better have been born a dog.”) In other words, how do phonemes generate an affective register? How much is predicated on the contextual/relational?

I’m interested to hear people’s thoughts on how phonemes, onomatopoeia, and soundscape are functioning here, alongside or against Othello’s other oratorical moments in the play.