I’ve chosen another Puck (+ fairies) passage, starting some lines up from Puck’s famous epilogue, but I think it dovetails nicely with Eli’s.

Enter Robin Goodfellow with a broom

Now the hungry lion roars,
And the wolf behowls the moon,
Whilst the heavy ploughman snores,
All with weary task fordone.
Now the wasted brands do glow,
Whilst the screech-owl, screeching loud,
Puts the wretch that lies in woe
In remembrance of a shroud.
Now it is the time of night
That the graves, all gaping wide,
Every one lets forth his sprite,
In the church-way paths to glide;
And we fairies, that do run
By the triple Hecate’s team
From the presence of the sun,
Following darkness like a dream,
Now are frolic. Not a mouse
Shall disturb this hallowed house.
I am sent with broom before
To sweep the dust behind the door.

Enter Oberon and Titania, King and Queen of Fairies, with all their train

Through the house give glimmering light.
By the dead and drowsy fire
Every elf and fairy sprite
Hop as light as bird from brier,
And this ditty after me
Sing, and dance it trippingly.

First, rehearse your song by rote,
To each word a warbling note;
Hand in hand, with fairy grace,
Will we sing, and bless this place.

[The song. The fairies dance]

Now until the break of day,
Through this house each fairy stray.
To the best bride bed will we,
Which by us shall blessèd be,
And the issue there create
Ever shall be fortunate.
So shall all the couples three
Ever true in loving be,
And the blots of Nature’s hand
Shall not in their issue stand.
Never mole, harelip, nor scar,
Nor mark prodigious, such as are
Despisèd in nativity,
Shall upon their children be.
With this field-dew consecrate,
Every fairy take his gait,
And each several chamber bless,
Through this palace, with sweet peace;
And the owner of it blessed
Ever shall in safety rest.
Trip away, make no stay,
Meet me all by break of day.

Exeunt all but Robin Goodfellow

If we shadows have offended,
Think but this, and all is mended:
That you have but slumbered here,
While these visions did appear;
And this weak and idle theme,
No more yielding but a dream,
Gentles, do not reprehend.
If you pardon, we will mend.
And, as I am an honest puck,
If we have unearnèd luck
Now to ’scape the serpent’s tongue,
We will make amends ere long;
Else the puck a liar call.
So, good night unto you all.
Give me your hands, if we be friends,
And Robin shall restore amends.                Exit       (5.1.362-429)

If we’re thinking about what makes a character’s speech distinctive, I chose this passage because at this point, all the fairies sound the same; this is generic fairy-speak at its fairy-est. Part of this is the meter—the tripping catalectic (thank you Hope & Witmore for this word) trochaic tetrameter is earlier in the play employed mostly by Puck, but also by Oberon, whenever they do something incantatory or mischievous; for “serious” matters or conversations, as in Eli’s passage, they use a more courtly iambic pentameter. The former is, of course, the same meter used by the witches in Macbeth; my question is, is the effect of a “sickening see-saw rhythm” that L. C. Knights describes an intrinsic quality to the meter? My hunch is no. The insistent stress of “Now…” that opens many of the lines above feels instead like it’s keeping the time for the dance. I wish I could use Wordhoard for prosodic concordance, to see where else Shakespeare employs this meter, but alas, this feature isn’t available for Shakespeare’s corpus.

Diction might also contribute, and this leads me to more DH findings. I ran two log-likelihood comparisons on Wordhoard: MND against Shakespeare’s corpus (first two figures), and MND against the comedies only (third figure).

These charts show that this passage incorporates many of the words that make up the unique verbal texture of the play: brier, lion, through, fairy, elf, night, to name a few. It makes sense that the most unique words are those uttered by either the fairies or rustics. (Note the words that made the list by virtue of Bottom’s repetition, e.g. “monsieur.”)

“Through” is an interesting case, at least for a non-Early Modern-specialist like me. At the beginning of 2.1, the unnamed Fairy uses the disyllabic spelling “Thorough” instead of “Through.” I used the EEBO N-gram browser to graph which spelling was more common, and found that “through” really spiked after ~1510. 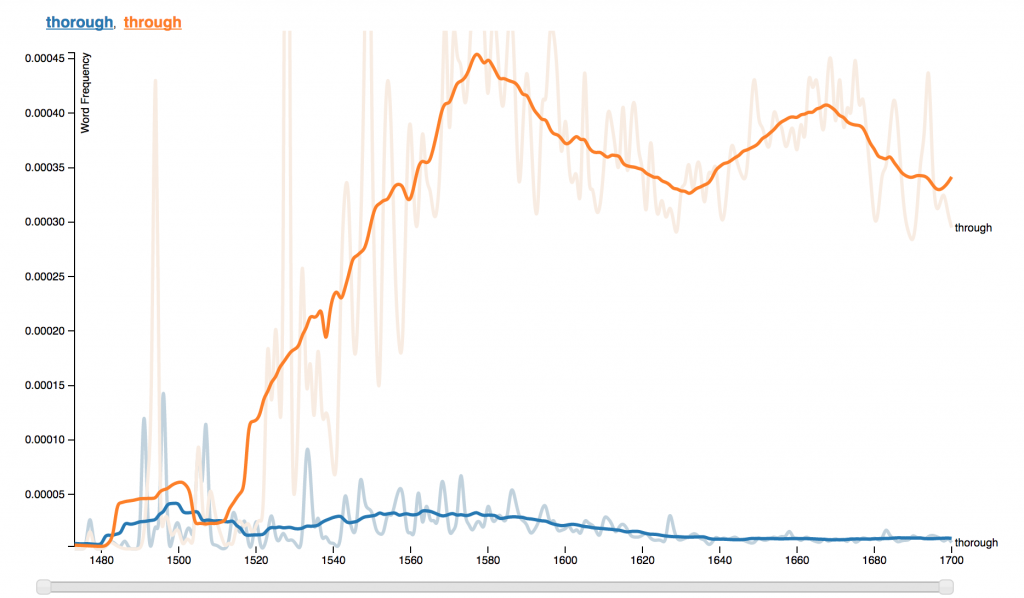 That the lemma “through” should be more commonly found in MND than in the rest of Shakespeare’s corpus is perhaps notable, too; it’s one of those common words we probably wouldn’t notice an increase in without stylometrics. As its usage in the passage above shows, the preposition suggests the “fairy” qualities of quickness, transparency, permeability.

Just a final note. I felt like I kept hearing the fairies drop “be” in interesting ways all over the place, so I used Wordhoard’s nifty “mortality” filter to compare how often “immortal or supernatural” creatures in the play use it, versus use by “mortals.” Well, the mortals use it almost twice as often (66x verses 39x). But looking at the concordances of these instances showed that the fairies more frequently use “be” at the end of a line (cf. “Lord, what fools these mortals be!” as well as instances by Oberon in the passage above.) This stress on the word, and the propensity to pair it with a rhyming word in a couplet, made “be” stand out in the fairy speeches during my first-pass reading—something I misinterpreted as word frequency before looking at the numbers.

I had many failed experiments with CQPweb. While it seems powerful in theory, I can’t seem to get it to function properly.

Thanks for reading this far. Looking forward to hearing everyone else’s findings in class!

Puck. My fairy lord, this must be done with haste,

At whose approach, ghosts wandering here and there,

That in cross-ways and floods have burial,

Already to their wormy beds are gone,

For fear lest day should look their shames upon:

They willfully themselves exil’d from light,

And must for aye consort with black-brow’d night.

Obe. But we are spirits of another sort:

I with the Morning’s love have oft made sport;

Even till the eastern gate, all fiery-red

But not withstanding, haste, make no delay;

We may effect the business yet ere day.

I will lead them up and down;

I am fear’d in field and town:

Goblin, lead them up and down.

By way of preface I should say that I really struggled to use the digital resources, especially the more sophisticated ones, which says something about my technological prowess and probably also something about the kinds of questions I want to ask about texts even when I’m trying to think “distantly.” That said, I’m fascinated by the shifting and overlapping stylistic registers in the passage. Oberon has just reprimanded Puck for the mishegas with the eye-drops; the two spirits are having a confrontation, in a mild sense of the term. Within this confrontation, there is a second, smaller dispute: about whether faeries can go about their business once morning comes. On another stylistic level, the passage begins in something like the proto-Gothic, full of dragons and churchyards, ghosts and worms; it passes through a high or even sublime register (Arden3 calls it “lyrical” and points to Chaucer); makes a brief stop in the quotidian (“make no delay”); and then ends, with a corresponding change in meter, in the incantatory realm of invocation, chant, spell.

I tried to investigate the frequency of ADV + CONJ + ADV phrases in the First Folio using CQPweb with an eye toward seeing how frequent contrasting pairs like “up and down” are in Shakespeare. The answer seems to be not terribly frequent, though I could never get “up and down” to show up in the list of results! Bottom-like rude mechanical that I am, I had worse luck trying to track down groupings in the form of ADJ + ADJ + Noun, like “fair blessed beams” and possibly “salt green streams” (unless ‘salt’ is read as a noun?).

Some more complex stylometric questions come to mind, as well, though I don’t know if the tools exist for answering them. How often in Shakespeare do different colors appear in close conjunction (e.g., “fiery red…salt green”)? How often do speeches and dialogues began and end with lines that use the same keyword (e.g., “haste” is arguably the most important word in the first line of Puck’s speech and the last of Oberon’s)? And (here I’m thinking of my old teacher, Ian Cornelius, and his new book on alliterative verse), how common are alliterative lines in Shakespeare (e.g. “For night’s swift dragons cut the clouds full fast”) and do they conform to any of the stress patterns of properly alliterative English verse?

I try not to play the token Classicist in the room too often  (along with Elizabeth, that is). However, I felt I had to mention that it was with a real sense of dread that, coming off of a seminar spent puzzling over what Jakobson and Burke might think that terms “metaphor” and “metonym” mean, I turned to my assignment for my survey of Latin literature for this week: Cicero’s De Oratore, Book III. The tortured syntax of this last sentence might give some idea of why the task of trying to figure out what Cicero meant to say about metaphor and metonym was not immediately appealing to me.

The process did, however, reward me with some interesting comparative material. Cicero, or rather Cicero in the persona of L. Lucinius Crassus (not the triumvir), devotes considerable space in this dialogue to ornatus orationis, the decoration or elaboration of speech. In his discussion of tropes, he insists on a distinction between those elements of ornatus that arise from single words (singulis verbis) and those which arise on larger syntactical levels (oratione id est continuatione verborum). To the former belong trans-latio (i.e. meta-phor) and immutatio (metonym, I think), in their various forms. To the latter belongs a trope that Cicero seems not to name explicitly, though his formulation aliud dicatur, aliud intellegandum est (“one thing is said, another is to be understood”) might gloss the Greek ἀλληγορία. For Cicero, these all seem to be special cases, or applications of, the larger category of translatio.

At risk of being anachronistic, one could say that Cicero approximately anticipates Jakobson’s axis of selection (verbis singulis) and his axis of continuity (continuatione verborum), and implies that allegory – or, what we might call extended metaphor, conceit, irony (?), is a sustained transfer of contingent selections projected across an axis of continuity – if that makes sense.

These are not complete thoughts, just some off-the-cuff reflections. I’m not sure how what Cicero says here in his de Oratore stacks up against what he says in his other rhetorical treatises, how all of that compares to other ancient Greek and Roman treatises on rhetoric and style, and what other intervening texts would have mediated the early modern reception of these classical terms. Cicero must be in the mix somewhere so I thought I’d share – though it’s worth noting that he frames this text as more of a practical than a theoretical enterprise. When you see how many different people have in different contexts tried to fix the slippery terms of metaphor and metonym over the years, you begin to understand why it is so hard to employ them consistently. Which brings me back, again, to what I hope is not too harsh a question: how well are these terms working for us as units of analysis?