“Documentary is on an impossible and unending quest to depict the depth of life as it is actually lived. Life will always run away from our films, and exceed our grasp, but the task, however vain, is to run after it again.”
– Ilisa Barbash and Lucien Taylor, Cross-Cultural Filmmaking, pg. 33

While documentary films typically depend on the co-presence of filmmakers and film participants in shared physical space, “remote documentaries” revolve around dialogues carried out in shared visual interfaces that connect people in disparate physical locations. This site provides advice for using Zoom and show how online interviews can be edited to heighten the interpersonal dynamics and sensory richness of the documentary film experience.

Before you read further or begin production, however, we encourage you to ask yourself, why make a documentary? That is, why use film to explore and express my topic? How can I maximize the auditory, visual, physical and experiential dimensions about my topic. If you are considering a project around interviews and contextual research, for instance, why not do your project in writing? But if you want to make a film, think creatively about how  visuals, sounds, and interactions can make your initial project more than data and analysis. For your project to maximize the effort that goes into  filmmaking, it should be a sensory, engaging, narrative filmic experience for both viewers and even for you and your film participants subjects, as you will learn later on this page.

This pages on this section of the site offers takes online interviews as the core of a documentary project. The pages increase in complexity from recording and editing simple video interviews to producing more complex short documentaries that combine interviews with additional sources of images and sound that will maximize the possibilities of filmmaking. However complex your project, you can turn “talking head” interviews into vibrant ethnographies by focusing on narrative threads and deliberate editing with multiple visual and sound sources. Before you start your project, we suggest reading our page on Editing Remote Documentaries to get an overview of the editing workflow as well as some possible story structures with which you might plan your recording and video gathering.

There are plenty of creative ethnographic possibilities in both simple and complex projects as long as you use the technique of “shooting to edit” that underlies our tutorials on this site. The concept of shooting to edit means collecting and shooting video in ways that makes editing more flexible later. Rather than editing your movie live and “in camera,” shooting to edit entails deliberately producing a variety of visual choices so that you have multiple visual and narrative options on hand when you begin editing. This often means repetition and variations. For instance, it could mean repeating questions in an interview. Or taking video of the same event from a number of angles, compositions, speeds, etc. In doing any ethnography your interviews and notes take on different, deeper meanings as you work through a project, so when shooting to edit in video you accumulate a number of choices for editing that can express the new meanings and narratives that emerge after sustained engagements with your footage.

The concept of “remote documentary” is new, born out of the circumstances of the Covid-19 pandemic. Yet documentary film as a form of ethnography has been around for decades. This means that as soon as you grab a camera in your hands, and as unique and novel the angle and perspective you bring, your film will automatically be embedded in a rich world of established documentary film styles. In their book Cross-Cultural Filmmaking Ilisa Barbash and Lucien Taylor put documentary films into 4 main stylistic categories. In this section you will find a descriptions of each to help you make conscious choices of the style you might adopt (along with its pros and cons) while contextualizing your own work within the broader framework of documentary film.

Keep in mind that these film styles are tendencies. They are not rigid types and different styles may coexist. We might use these types to describe the visual style, such as camera placement and editing, or ways of claiming truth. Documentary scholar Bill Nichols calls this the “mode of address” to describe how a documentary film addresses its viewer. Further, as filmmaker and anthropologist David MacDougall reminds us, films inscribe social relationships: Between the filmmaker and the film participants, on one hand, and on the other, the relationships between the film participants, the filmmaker and viewers. Thus, each of these styles can imply and emphasize certain kinds of relationships. The fascinating, creative aspect of doing remote documentary is how might we bring these styles into remote documentary? What new film styles can emerge from the remote relationships we establish online?

This is a style of documentary in which the filmmaker’s narrative – the ideas and messages they are aiming to convey, drive the sequence of shots and images. This narrative may be put forth directly, with an on-screen commentator or a voice-over track. The visuals of the film complement that track, and usually cannot stand on their own. It has been argued that the increased dependence on the voiceover for the coherence of an expository film may detract from the power of the images within it, or silence the narrative that participants in the films would advance. In this sense, it is clear that this documentary style prioritizes the narrative of the ethnographer, rather than that of the subjects being filmed. For this reason, since anthropology became a self-reflexive discipline, expository filmmaking has been left behind as it is seen as giving too much authority to the filmmaker’s  voice.

Although expository documentary film has so far been framed as authoritative, and therefore as somewhat inappropriate for self-reflexive documentary ethnography, it is important to remember that a voice-over need not explain the visual content. Instead, it may directly contradict the visual contents, achieving a satirical effect. This means that the presence of the voice of the ethnographer does not necessarily render this type of film incapable of presenting a more nuanced perspective. 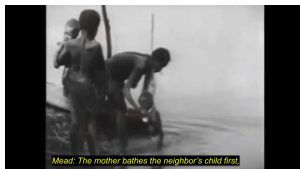 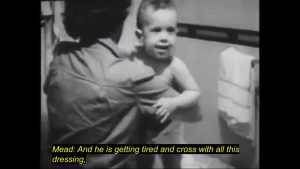 In “Bathing Babies in Three Cultures” Margaret Mead narrates the actions and imputes the thoughts of the film’s subjects. Mead’s voice-over is off screen and tells viewers what they should look at, and how they should interpret what they are seeing.

Contrary to both expository filmmaking, which uses shots that align with the filmmaker’s narrative, and impressionistic filmmaking, which uses subjectivity to convey the feelings of individuals, observational filmmaking tries to portray life “as is.” This does not mean that shots for observational filmmaking enter the film unedited. Far from it – observational films often include both long shots, close-up shots of details and scenes from multiple angles, all edited together to create continuity, a depiction of life as richly experienced. In the sense that meaning is created through the sequence of shots rather than through the presence of an imposed voice, observational films can resemble impressionistic films. In that their meaning might be less obscure, however, they can resemble expository films.

But can any form of film really present life “as is” without the camera? In other words, does the presence of the camera not inherently change what the human eye would observe? Film scholars have have defined two kinds of observational film:

In direct observational filmmaking, the creator tries to imitate the fly on the wall. In other words, the presence of the camera is not acknowledged within the film. 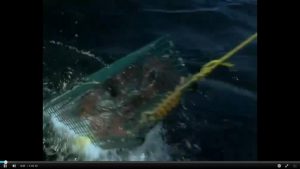 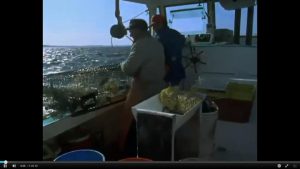 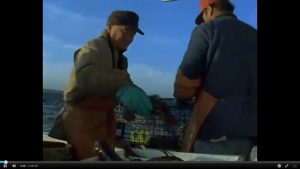 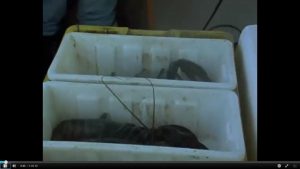 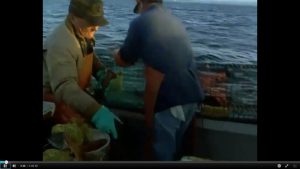 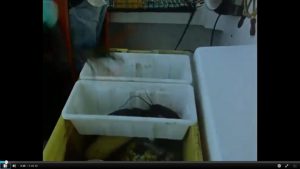 The subjects of Frederick Wiseman’s “Belfast, Maine” go about their work as if they are not being filmed. Notice how the sequence of shots alternates among different spots in the same scene.

In cinema verite, the camera and filmmaker interacts with the film subjects often induce action that might not have occurred otherwise. As Jean Rouch, one of the originators of the style described it, this style shows us truths that occurs in the making of cinema. Filmmaking itself is part of the events it records. 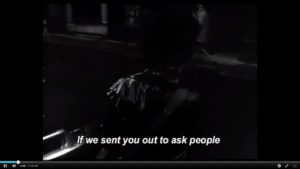 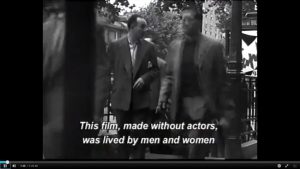 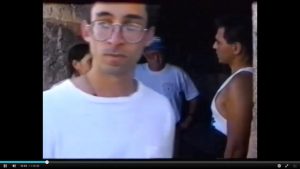 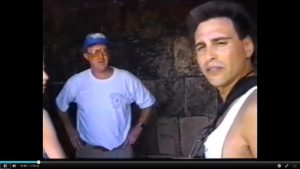 While interviewing two participants Quetzil Castañeda looks directly into the camera in “Incidents of Travel in Chichen Itza” and addresses Jeffrey Himpele, who is filming the conversation.

It should be noted that neither Direct Observational nor Cinema Verite can portray life exactly as is without the camera. A camera can never quite resemble a fly-on-the-wall, as it is always already shooting scenes selected by the filmmakers, and it may  influence the subjects. Conversely, including the presence of the camera as part of the action still does not allow the ethnographer or filmmaker to portray what life would be like if the camera was not present in the first place.

Reflexive filmmaking is focused on uncovering the conditions and choices of filmmaking in an effort to depict the meaning of the film from the filmmaker’s perspective. It tries to make as clear as possible to the viewer that what they are watching is a depiction of life, rather than life itself. Though not always in the first person, reflexive films problematizing, or at least reveal, their stylistic choices, and shed light on the ways in which they have selected the realities they were originally trying to portray.

The main criticism of reflexive filmmaking is that in its effort to achieve transparency, its focus may end up being more so on the experience of the ethnographer and less so on the surrounding context. Additionally, the filmmaker’s frankness does not by default render their choices in the field neutral. Finally, such films have been criticized for assuming that in watching a reflexive film, their audiences are assuming that they are observing life itself, rather than a film. But even reflexive films are selective films. 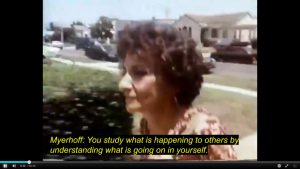 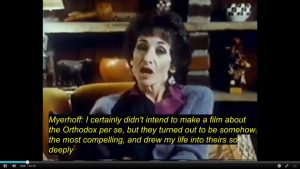 Barbara Myerhoff demonstrates reflexivity when she discusses her anthropological intentions in making In Her Own Time.

Watching the above clips following each description, you may question the categories themselves. After all, the voiceover of subjects speaking may give the visuals meaning in an impressionistic film just as much as the voiceover of the ethnographer in an expository film. A verite film may have self-reflexive elements. Additionally, different parts of a film may resemble different documentary styles. As a result, the above styles should not be seen as distinct categories, but rather as overlapping styles that are usually mixed in varying proportions.

If expository filmmaking leaves viewers with no doubts about the filmmaker’s main message, impressionistic films lie at the opposite end of the spectrum of certainty, including the voices of participants, possibly of the filmmakers themselves, and omitting pointers as to how these should be interpreted. In other words, subjectivity is embraced more so than objectivity, and creators may aim to provoke the audience into asking questions rather than deliver definitive answers. This looseness that characterizes impressionistic filmmaking may obscure the ways in which they are educational, or fact-based, as documentary films are usually assumed to be. In fact, impressionistic films may often resemble works of fiction and seem nonsensical. Nonetheless, the elusiveness of the messages conveyed should not be mistaken for absence of intent in the process of filmmaking. Instead, the delivery of multiple messages is more reflective of the self-consciousness of the creator or participants that has led them to communicate different people’s individual experiences at once. 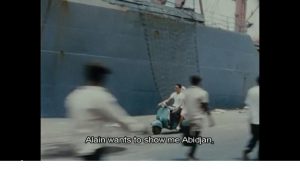 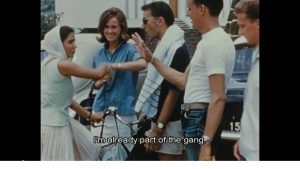 Nadine, one of the subjects of Jean Rouch’s “Human Pyramid”, narrates her experiences in the film 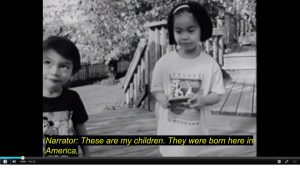 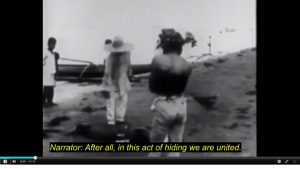 What film scholar Bill Nichols calls “performative films” are similar to impressionistic films. These films may emphasize the filmmaker’s subjective engagement with participants or the topic. They resemble other impressionistic films in that they aim to present subjective experience, but whether or not they present the filmmaker’s subjectivity, they differ from the impressionist style in that they intentionally avoid the forms of realist representation inherent in the other documentary types.

For more thorough information on each documentary style, see Chapter 1 of Cross-Cultural Filmmaking and Chapter 2 of Introduction to Documentary.