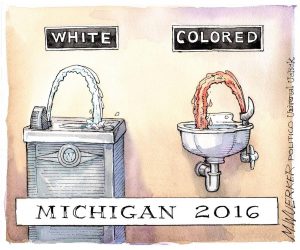 The following cartoon was drawn by politico cartoonist Matt Wuerker following the Flint Michigan Water crisis this past year. The picture features two water fountains with one labeled “white” and the other labeled “colored” referencing to the segregation that plagued America until the formation of the Civil Rights Act in 1964. The water coming from the “white” water fountain is clean and clear whereas the water coming from the “colored” water fountain is murky and filthy; thereby suggesting the differences in water are designated solely to the races that drink from them.
One of the major themes in class that we discussed was the perpetuated interchangeability between race and disease. In John Duffy’s The Sanitarians: A History of American Public Health, the author examines this idea through observation of the interactions between the medical world and people of color throughout history. He goes into detail on the experiences of immigrants who were forced to be “sterilized” with harsh and demeaning treatments upon entrance to America and how such actions perpetuated this association between people of color and disease.
The Flint Michigan Water Crisis that Matt Wuerker’s cartoon illustrates reminded me of how this idea of interchangeability between race and disease could still be perpetuated today. The Flint Water Crisis poisoned over 100,000 residents in the Flint Michigan community with 57% of these residents being black. Therefore the majority of patients coming in with illnesses as a result of the infected waters were patients of color. With the sudden influx of sick people of color, one might easily have assumed that the illnesses were associated with the race rather than with the community that the people lived in. This might explain why it took Flint Michigan the amount of time that it did to address the water poisoning and even acknowledge the infected water as an issue in the first place.