SKARAMAGAS, Greece –– There was a heat wave in southern Greece this week, with temperatures projected to climb as high as 111 degrees.  In the Skaramagas refugee camp outside the Greek capital of Athens,  hardly anyone was venturing outdoors.

Kajji Dawd sat atop a mattress in her air-conditioned, solar-powered metal container, known as an Isobox, where she lived with four of her daughters. Three years earlier, after the Islamic State of Iraq and Syria (ISIS) attacked their city and bombed her home, they had fled Iraq.

Dawd’s husband and two youngest daughters remained behind while she and the others trekked to Izmir, Turkey, and then across the Aegean Sea to reach the Greek island of Chios.

Although  temperatures were approaching  record levels in Greece, the camp remained cooler than Dawd’s hometown in Mosul, where forecasts were predicting highs of up to 118  degrees. Heat waves were nothing that Dawd was unaccustomed to. It was her high blood sugar levels that concerned her.

Dawd, 55,  had diabetes. When she was in Iraq, she was able to pay for medicine to keep her blood sugar low. In the camp, she was forced to go without. Instead, she carried a bag with glucose test strips and a meter to monitor her diabetes. On this day, she had only one strip left. She said she was saving it for an emergency. In the meantime, she said, she was forced to wait two to three hours every other day to be examined by a  camp doctor. Many other women like her in the camp face the same problem, she explained.

“Before this, we were in Chios for five months and 15 days,” Dawd said. At the Vial refugee camp there, tensions escalated to frequent violence between Afghans and Syrians. “It was like being in a jail,” she said.

When fighting erupted in the camp, her blood sugar level rose to 350 mg/dL, though a healthy range for her would be between 90 – 180mg/dL.

At Skaramagas, Dawd said,  her blood sugar had decreased significantly. She was able to cook and wash dishes during the day, and take walks by the sea in the evening. Though it was blistering in the open, gravel-covered areas of the refugee camp, one of its advantages was that one side bordered the sea.  Along a cement strip facing the waves, , entrepreneurial migrants had set up tents with pool tables and coffee stands. There were signs warning people not to swim in the  water, polluted by the ships at a nearby port. But in the evening, children could be seen jumping in.

The view from the Skaramagas dock

Dawd said she hoped that she and her family would be approved for asylum in Greece. She wanted to travel to a northern country like Germany and have her husband and remaining daughters meet her there.

Life was difficult in Greece, she said, but easier than Iraq. 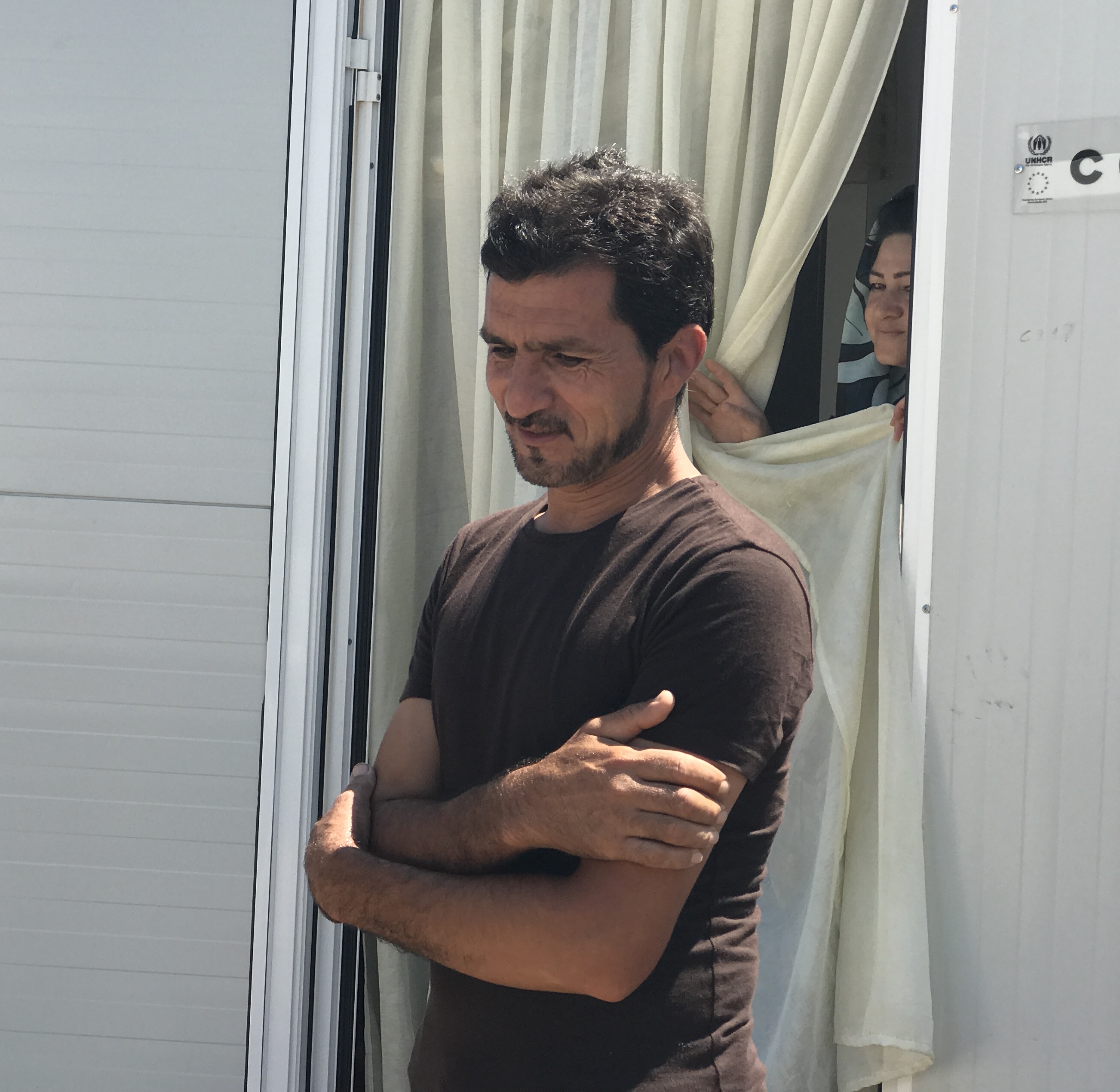 ATHENS, Greece –– Mohammed Farid Eskandari watered his flower garden while his wife Rooya Golami peeked through the front door. Out front were a pink bicycle and bright red slippers belonging to one of their four daughters.

But this was not the family’s house. It was a prefab metal container to which Greek authorities temporarily assigned the Afghan family when they arrived at the Schisto refugee camp 18 months earlier.

Schisto opened near Athens in February 2016,  after the European Union demanded that the Greek government establish more relocation centers. Because most of the refugees at Schisto are from Afghanistan, it is difficult for them to win certification as asylum seekers, according to Kostas Asinakopolou, one of the federal employees who helps run the camp.

That wrinkle means that many of the migrants who arrived at the so-called relocation camp have remained, instead of quickly heading to northern Europe, as envisioned.