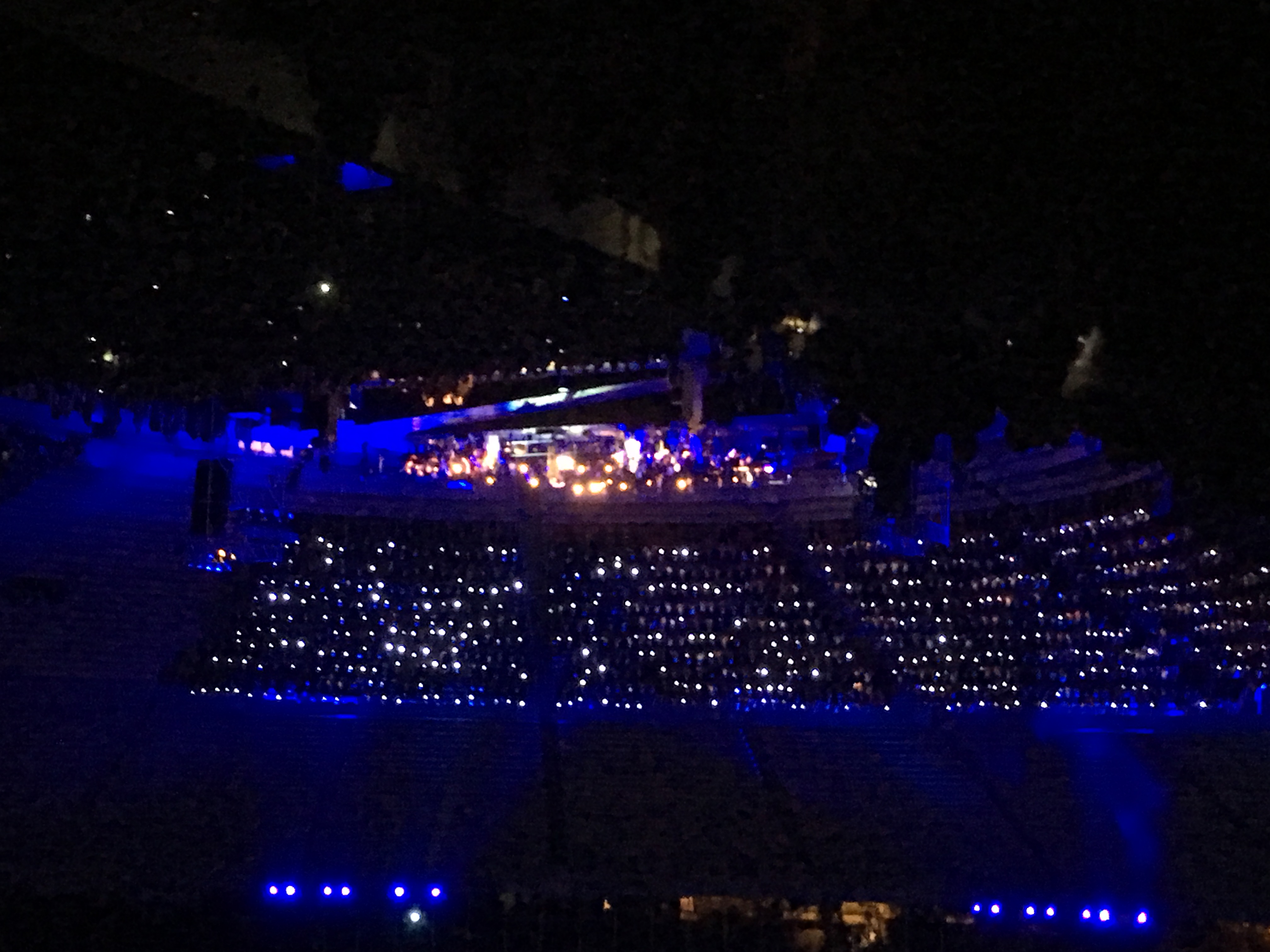 SIngers in a 1000-voice choir hold flashlights and perform the music of Mikis Theodorakis in honor of the composer’s 92nd birthday.

ATHENS, Greece — On June 19, nearly 50,000 Athenians turned out to pay tribute to Mikis Theodorakis, a renowned composer and icon of Greek revolutionary nationalism, at a concert held in honor of the composer’s 92nd birthday.

The next day, activists with the Greek Paraititheite movement rallied outside Parliament, calling for the government led by Prime Minister Alexis Tsipras to step down.

Together, those outwardly unconnected events highlighted themes of revolution, resistance and perseverance that are central to this ancient city’s cultural and political identity.

Theodorakis, with his wild, shock-white hair and imposing eyebrows, is Greece’s foremost composer. He also is a political icon for left-leaning Greeks. Theodorakis was detained during the Greek civil war in the 1940s, according to an interview with The New York Times, and the music he composed grew increasingly political in the decades that followed. Theodorakis regularly drew themes or lyrics for his music from classical Greek poetry and, during the military dictatorship from 1967-1974, he and his music were banned. Theodorakis later was elected twice to parliament under the Communist party.

The Greek National Opera organized the June 19 concert, called “1000 voices honor Mikis Theodorakis.” The audience nearly filled Kalimarmaro, the marble stadium that was constructed for the first modern Olympic games in 1896. The massive choir and a full orchestra performed Theodorakis’ music for more than two hours. The crowd swayed in synchrony. Young children and elderly men alike hummed along with the starting notes of each song.

One composition, Tο παληκάρι έχει καημό (The Heartbroken Boy), with words by poet Manos Eleftheriou, spoke of a young unemployed man who could not afford even a cigarette, yet “his eyes are two birds” and he lived with hope.

“Resign” movement members at Syntagma Square in front of Greek Parliament on June 19.

The next day, it was the Paraititheite movement’s turn. The group, whose name means “resign” in English, represents a more conservative version of political engagement and resistance in Greece. The group blames Prime Minister Tsipras and the Syriza party for the economic collapse of the last few years.

On Tuesday, a middle-aged protestor, Christos Catiforis, stood at the front of the peacefully insistent crowd at the Paraititheite rally, holding a sign that read “COMPLETE LIES TSIPRAS: NO MORE.”

Catiforis, who wore a neat checkered shirt and sunglasses perched atop his salt-and-pepper hair, explained that most of the Paraititheite advocates are new to political action.

Syriza is a radical left coalition in Greek parliament, and the Paraititheite protesters are generally moderate-to-right voices who blame Syriza for allowing the economy to fall into ruin. According to Eurostat data, Greek unemployment rates have hovered around 25 percent since May 2012, the same time that Syriza became the main opposition party in the New Democracy-controlled government. Syriza became the leading party in the general elections of May 2014. According to Catiforis, “this government does not want Greece to recover.”

Although the Paraititheite protests and Mikis Theodorakis’ music do not seem initially comparable, the two share a focus on empowering citizens to speak and think about the forces that affect everyday life in Greece. Although Theodorakis supports socialists and the Paraititheite advocates would prefer a center-right approach, both show that in Greece, culture and politics work best when working in tandem.